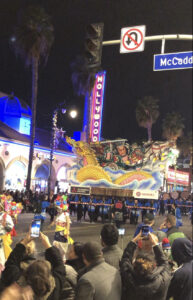 The shmaltziest parade ever! Everybody has got to go at least once, if only to see the Cat in the Hat balloon do the limbo under a street light! The Sunday after Thanksgiving, Hollywood officially kicks off Christmas season with a grand parade, featuring floats, movie cars and C-list celebs galore: Wally and the Beve will be there, with The Incredible Hulk! The real one, Lou Ferrigno, not Mark whats-his-name. If you’re in town for Thanksgiving, do yourself a favor and go! The route runs east from the Chinese Theater, down Hollywood Blvd, to Vine, then west on Sunset. Take the Metro, or bike to Hollywood!